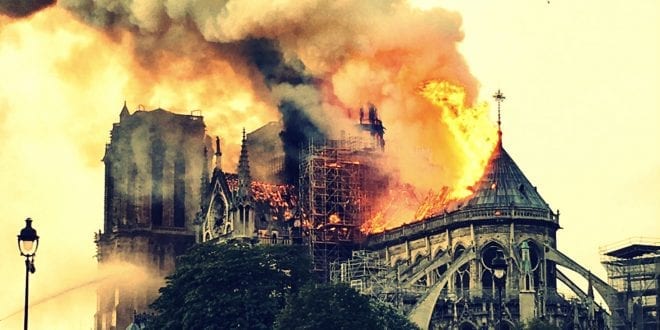 Mystery still surrounds the burning of Notre Dame Cathedral in Paris, the very symbol for France’s Christian heritage. Even before the fire was extinguished, French authorities stated that the Notre Dame fire was a “mistake due to renovation.” How did they already know?

Paris’ Church of St. Sulpice burned just a few days earlier, on Sunday, March 17, set afire by arson – as many churches have in France the past year. Still, French authorities ruled out arson in Notre Dame even before an inquiry into the matter, which some characterized as a political decision, writes historian Hanne Herland in her weekly column at World Net Daily, America’s leading conservative outlet.

The Notre Dame consumed by flames was instantly described by the joint mainstream media as an isolated happening. Why? Over 1,000 churches have been set afire, vandalized and subjugated to theft in France in 2018 alone. Over 80 percent of the desecrated places of worship in France are Christian churches, according to police reports. It is a massive scandal.

The situation is horrifying: In the same period as the Notre Dame burning, the Saint-Denis basilica outside Paris was vandalized, and in Notre-Dame-des-Enfants, in Nimes, human poo was formed as a cross on a wall, its consecrated bread found in the garbage. Human excrement is smeared on and in French churches on a regular basis, a well-known method to demonstrate hatred against that which is sacred.

Two churches are now desecrated every day, yet French politicians remain locked behind a code of silence, including the clergy. Very little is done to stop it, though the rumors state that the priesthood and church leaders are desperately pleading for the government to react. This is a scandal of gigantic proportions and a blatant attack on France’s traditional values. What if Notre Dame were a mosque or a synagogue? The uproar would have been at an all-time high. Yet, the media hardly mention the attacks on churches, as the truth about the slow killing of Christianity in France is silenced.

The examples are seemingly endless. As Islamic scholar Raymond Ibrahim writes, the St. Nicholas Catholic Church in Houilles was vandalized on three separate occasions in February; a 19th century statue of the Virgin Mary deemed “irreparable” was “completely pulverized,” and a hanging cross was thrown to the floor.

The Saint-Alain Cathedral at Lavaur was desecrated and crosses smashed, the altar cloth burned and the arms of a crucified Christ mutilated in a mocking manner.

As the French media do not mention the ethnic origin of the perpetrators, it is hard to know to which degree the vandalization is linked to Muslims or secular extremists, yet smearing poo on churches and leaving excrement on altars is hardly a typical European way of demonstrating disdain.

There are other driving forces. Notre Dame is state-owned and was not insured. The building was in a very poor state; the government had for years halted the urges from the clergy to renovate. The wooden roof where the fire “started” was allegedly not under renovation with no workers there, and the French government recently removed many of the valuable artifacts.

One thing is certain: The spate of attacks on churches in France is not deemed an important issue by its radically secular elites, who for decades have sought to undermine France’s Christian traditional values as outdated. If they cared, they would have done something about it.

Ever since the French Revolution, the mocking of religion and disdain for priests has been a national trait. When the magazine Charlie Hebdo, on its one year marking after the 2015 terrorist attack, chose to print a blasphemous picture, depicting God with blood on his clothing, saying he was the real perpetrator of the attack, the Vatican stated that the cover was sacrilegious: “Behind the deceptive flag of an uncompromising secularism, the French Weekly once again forgets what religious leaders of every faith have been urging for ages – to reject violence in the name of religion and that using God to justify hatred is a genuine blasphemy,” adding that Charlie Hebdo does not want to respect believers’ faith in God.

In the aftermath of the Notre Dame burning, French officials have largely focused on its cultural value, billionaires now saving the French state from the restoration expenses, yet few focus on the church’ spiritual heritage as the most valuable element. Was religion dead in France – and traditional European culture with it – long before Notre Dame burned?

Watch Herland’s interview about the state of Christianity in Europe: 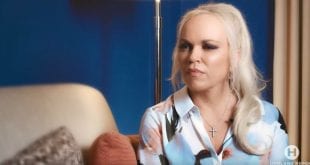 Iben Thranholm: The world is not only political, it is a spiritual place 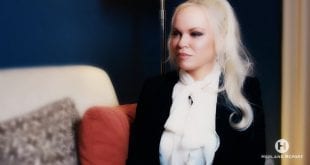 Herland Report TV: Iben Thranholm How ironic that Russia is the defender of Christian faith?