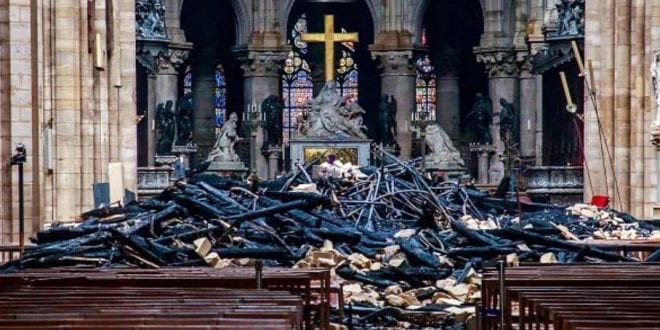 Herland Report: Robert David Steele: The big question is why French authorities stated that the Notre Dame fire was a “mistake due to renovation” even before the fire was extinguished.

How did they already know? Why did the media accept the explanation with no further demand for an inquiry, only a state fundraiser to rebuild the church?

The Notre Dame in Paris is probably the strongest symbol of France’s Christian heritage, in a country where over 1000 churches have been attacked, burned or vandalized in 2018 alone. Why is this information left out?

Human excrement is smeared on and in French churches on a regular basis, a well-known method to demonstrate hatred against that which is Sacred. Why no uproar? (Feature photo: Getty)

In Paris, Church of St. Sulpice burned on Sunday, March 17, set afire by arson – as many churches have in France the past year. Still, French authorities rule out arson in Notre Dame, even before the fire is extinguished, by some characterized as a political decision.

The blatant attacks on France’s Christian heritage is a scandal of massive proportions. What if Notre Dame was a mosque or a synagogue? The uproar would have been all time high.

Robert D. Steele, CEO of Earth Intelligence Network, founder of the Marine Corps Intelligence Command, with many years experience as a Clandestine Services Operations Officer for the CIA has these remarks in an interview with Teheran Times:

Robert Steele: – Let’s start with the fact that Notre Dame is owned by the state, not the church; the fact that the building has been virtually condemned (as were the Twin Towers in New York from 1988); and the fact that the state has been refusing pleas from the Church to fund the renovations necessary to keep the site safe for citizens and tourists, while protecting the priceless artifacts.

We have learned that Notre Dame is not insured by any commercial organization – the state of France “self-insures.”

The coincidence of Notre Dame burning on the same date as the sinking of the Titanic – long said to be a Jesuit initiative to wipe out the leaders of the wealthiest families opposed to the creation of Central Banks – and the coincidence of Michelle Obama passing by Notre Dame on a river dinner cruise as it burns, were instantly noted in France.

It is known that the Rothschilds had a suite overlooking 9/11 and took their breakfast on the balcony during that event.

We have a Jesuit in France, citing the Church staff at Notre Dame, stating plainly that the fire was intentionally set; we have the fact of a token restoration on-going with the vital side effect of removing all precious artifacts from the building prior to the fire.

We have the fact of the police and fire departments making a pretense of saving France’s most epic cultural – not just religious – monument while letting it burn; we have the unverified but reported and believed story of two people found dead inside, each with two bullets in each of their heads; and we have these two additional facts:

One: As a result of this contrived atrocity, Macron has been able to avoid public discussion of the unfavorable outcome to him of the recent debate with the Yellow Vests and is in the process of repressing further Yellow Vests demonstrations that are among other things demanding the exit of France from the EU; and

Two: We have a European election coming up in May that the EU expected to lose – the EU is over, individual states are ready to follow the British out, and the Deep State is now desperate. This planned atrocity may delay the demise of the EU by a year.

In conclusion, here is what my French source is predicting: that Germany particularly, along with the British (and perhaps against the will of their publics) will quickly offer to pay for the restoration of Notre Dame as a gesture of unity, and this “we are one with Notre Dame” campaign will be intended to save the positions of Macron, Merkel, and May, and to save the EU as well as the Central Banks.

The burning of Notre Dame is the Reichstag equivalent for France – a false flag intended to keep the criminal EU together for another year of looting and warmongering.

There are early signs that the “investigation,” which will be totally controlled, will “blame” the restoration firm for being careless.

My French source has already established there was no electricity in the area where the fire is alleged to have started. Looking at the manner in which the roof burned so quickly, what I see is a 13th century wooden rooftop that was sprayed lightly with incendiary fluid or powder. I attribute the two dead to an attempt to stop the initial deliberate fire setting.

The Chief Architect of Notre Dame publicly stated this was not an accident; that there was no welding or other possible cause; and that 800-year-old wood is like petrified rock, impossible to burn unless an accelerant is added.

Others have commented on the possibility of a Directed Energy Weapon (DEW) being used, in addition to pre-applied accelerants, to ensure the entire roof burned all at once in the shape of a cross visible from outer space. This was a Satanic false flag ritual burning of a holy site.

Any serious investigation would look at every minute of every day of Macron’s last ninety days, every phone call, every text, every email, and quickly show the network of collaboration with politicians, and probably very senior Freemasons and Knights of Malta as well as Jesuits, all of whom have sworn oaths of loyalty to the Deep State and against individual Republics or sovereign states such as Iran or the USA.

Robert D. Steele,
CEO of Earth Intelligence Network, founder of Marine Corps Intelligence Command, a Clandestine Services Operations Officer for over 30 years and spent many years in Latin America and Asia. Steele holds two graduate degrees and is a distinguished graduate of the Naval War College, and has for 30 years demanded intelligence reform and the need to redefine national security.
THOUSANDS SUBSCRIBE TO OUR WEEKLY NEWSLETTER AND TV SHOWS. Follow the trend and be one of them: 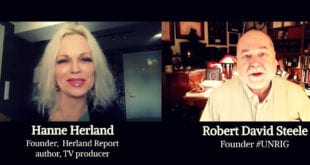 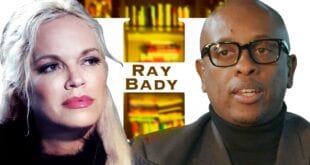