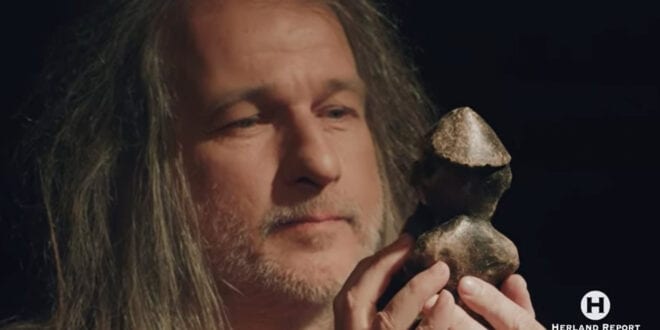 Herland Report: The Viking story is the focus in our VIKING TV series on YouTube, where scholars, historians and authors, Catholic priests and Viking enthusiasts and heathens speak about this spectacular age.

A most exciting theory about the Norse god of Odin and the heritage of the Scandinavian people, is expanded by the Norwegian archaeologist Thor Heyerdahl.

He was known for his unconventional approach to history and myths.

He stirred a lot of interest when he claimed that the story of Odin – told in Snorri Sturlason’s Heimskringla and Poetic Edda – was real, not fiction.

According to Snorri, Odin was not a fantastical, invented figure – but a real person.

Odin was the King of an ancient people, residing somewhere in modern-day Caucasus, with the pride of their tribe being the splendid Aas citadel (Åsgard).

With the invasion of Roman legions, they fled and migrated North, eventually settling in Scandinavia. Odin was wise and strong, and when he died, he was so dearly loved that his followers began worshipping his name.

The old Viking culture was famously expanding from the time period of 750 till 1100 AD. We know this period now from the TV series “Vikings”. As proud Scandinavians, we therefore set out to make a VIKING TV series about our heritage.

According to this theory, Odin’s children – Thor, Freya, Njord, and so on – continued to lead their people, and were also hailed as deities upon their deaths.

Odin’s ruling dynasty would be called the Ynglings (modern scholars suspect the name originates from Scythlings).

All members of this deified family became rulers over the Scandinavian lands, forming different Norse tribes (Jutes, Zealanders, Suedi, Gothic, Trondic, etc). Some went South-West to settle in modern-day Denmark[1]. Some stayed in Uppsala in Sweden[2].

Others decided to cross the awe-inspiring Northern mountains and settle along the stretched, barren coastline of modern-Norway[3]. Here they dwelled for centuries – developing villages, merchant towns and agricultural farmlands.

To the Romans, this Northern region of Scandinavia was both mysterious and obscure. However, they knew that its inhabitants had much in common with other Germanic peoples they had encountered in central Europe.

Tacitus, the Roman historian, investigated the Germanic tribes in 98 A.D and wrote down his assessments. He emphasis ed that they had a strong culture of individual freedom and communal customs. “…and good customs are here more effectual than good laws elsewhere,” Tacitus noted.

They were deeply suspicious of Kings and absolute rulers. In their rule of thought, the King ought to serve the people, not the other way around. However, should there be war, they regarded it as a duty and an honour to die fighting for their leader.

When the Romans neared the borders of modern-day Denmark, they clashed fiercely with the Jutes, who then rallied the other Norse tribes under the lordship of King Dan (who most likely gave Denmark its name), and assaulted the Romans. The Romans fled and would never return.

However, though the Romans would not return to Scandinavia, the Scandinavians returned to them. In the 5th century A.D, Saxons and Anglers  – two tribes hailing, according to the legend, from Odin’s people – swept across Britannia and claimed it for themselves.

They would be known as the Anglo-Saxons, and would rule England for hundreds of years. Other Germanic tribes – Franks, Goths, Suedi, Vandals – stormed through the Western Roman Empire and destroyed it. The classical world was shattered. Europe began a new era.

The Franks settled in modern-day France and would inherit a lot of traditions, laws, and institutions from the ancient Romans.

By the early 700s, their King, Charlemagne, created a vast Christian Empire that pushed back into the old Northern territories – perhaps too deep.

As his Frankish troops ventured into Scandinavia, they made the same mistake the Romans had done seven centuries before, and clashed fiercely with the pagan peoples of the Far North.

The Franks called them Nortmenn or Northmen – a Nordic Germanic people who had never left their ancestral lands nor changed their customs. Very little was known about them.

So who were these Norse peoples?

The Franks knew they were very shrewd tradesmen. They had used to trade with ancient Romans before, but also with distant peoples (for instance, a Buddha statue dating 500 A.D has been found in modern-day Sweden, suggesting a complex network of trade routes).

They also fought fiercely with other Norse clans to expand their holdings, avenge their ancestors, or raid each other’s wealth.

The only cause that seemed to unite them was when a foreign intruder (non-Norse) invaded – then, they quickly rallied to inflict terrible madness upon their common foe.

This is the second article in a series as we address the Viking Age in the Herland Report VIKING TV series on YouTube. Read the first about Snorri Sturluson and the warriors of Scandinavia here.

[1] Here settled the old tribes of Jutes, Zealanders, and others. While fighting the Romans, they came under lordship of King Dan, a descendant of Odin. Dan could have given the land its name – Danmark (Denmark) – as mark indicates border.

[3] Notably the Tronds, but also the tribes of Maere, the Sogn, the Hords, and others.

Herland Report: VIKING TV series: The Great Game for England in 1066 is a …