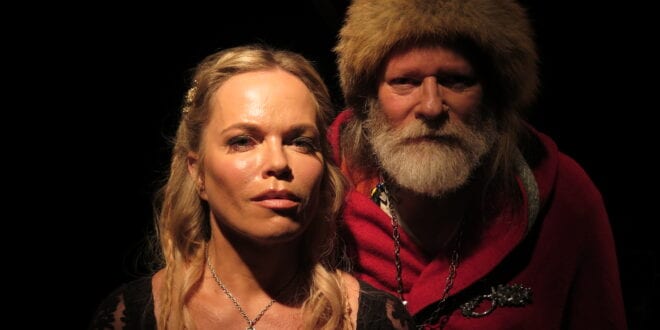 The VIKING raids, expansion and the creation of Russia

Herland Report: The Viking story is the focus in our VIKING TV series on YouTube with Georg Olafr Reydarsson, where scholars, historians and authors, Catholic priests and Viking enthusiasts and heathens speak about this spectacular age.

We now celebrate 10 million views on YouTube in just a short while and release new interviews about the Viking Age.

In 793 A.D, a group of Norse raiders, known as Vikings, attacked and plundered the famous monastery of Lindisfarne – one of the finest centres of Christendom in Britannia.

For the Christians, it was an unbelievable sacrilege. For the Vikings, an easy loot. Since the monasteries were packed with gold, yet undefended, Vikings repeatedly returned to sack them.

Some say the Lindisfarne attacks were primarily politically motivated, aimed at retaliating against Charlemagne, a Christian ruler who had clashed heavily with Saxons and Danes. Regardless, this was the beginning of the so-called “Viking Age” – a period that took its name from the Norse word viking, meaning raider.

Unfortunately for the Europeans, this age would last for a long time.

European kingdoms struck back with force, but instead of intimidating the Vikings, they only provoked them. Returning to their shores in year 865 were not bands of brigands – but entire armies.

The so-called Great Heathen Army, led chiefly by Ivar the Boneless, invaded England and destroyed anything in its path. For a moment, they held almost all of England, making York their headquarters.

Though they were subsequently beaten, new waves of Viking invasions continued to plague Europe.

They sacked the lucrative trading centre Durestad four times, incurring a devastating blow to central Europe. These Northmen, as the Franks called them, seemed unstoppable.

However, they did not come just to plunder – they also came to settle. For some debated reason, the Norsemen embarked on a massive exodus out of their ancestral lands and swept across Europe to find better land.

It was as if the events that led to the destruction of the Western Roman Empire (5th century A.D) were repeating themselves.

Norsemen settled in Northern France (Normandy), Ireland, England, across the islands of the North Sea, in Frisia (in modern-day Germany), Sicily and across Eurasia.

Here they carved in their own, new Kingdoms and Earldoms, and their Norse culture soon began influencing the European. Not only did languages exchange words and grammar rules, but traditions, art and worldviews merged.

The consequences of this process are undeniable: it led to the development of new ideas, cities and even new countries.

For instance, they were the founders of the Russian state – chief Ruric from Sweden founded the Rus kingdom in Novgorod, creating a dynasty that would rule all the plains from the gulf of Finland to the Crimean peninsula.

It became the first organised authority on these wide plains and morphed into the Kievan-Rus Empire, marking the beginning of the history of Russia.

On Ireland, the Norse Vikings founded the city of Dublin, developing a Viking-kingdom on Ireland that would rule the Irish sea for centuries.

So why did these Scandinavian Vikings travel so eagerly away to foreign territories?

One theory holds that, in the face of enhanced trade with Europeans that produced more wealth, the population grew too large for the scarce Northern resources to support.

Another claims there was a climate crisis in Scandinavia that worsened the food production prospects, sending large sways of the population abroad. Many therefore migrated to foreign lands that had better farming opportunities. Regarding this, England was the jewel.

The endless meadows of Britannia proved irresistible for the Norsemen. For centuries they would attempt, and achieve, to become Britannia’s masters.

Norsemen valued the spirit of adventure. They were curious, and courageous. Any opportunity to defy the will of the waves by crossing the sea, find a distant land and engage in risky violence or mysterious exploration, ought to be taken.

After all, they had only a limited time on Midgard –Middle Earth – before they had to enter the Spiritual domains of the gods. They longed for a good legacy to leave behind, hence the Norse proverb “cattle die; comrades die; and you die too. But the words of a legacy lives forever.”

They probably also sought the favour of the gods, who, in Norse religion, rewarded brave souls by various means.

Upon a Norseman’s death on the battlefield, the heroic warrior could be taken into Valhalla – the hall of the slain – where the dead would feast and wrestle with Odin until the end of time. Good farmers or merchants could enter the home of Frey, the god of wealth.

Those who lived without accomplishments entered the dull world of Hel – where absolutely nothing worthy of significance happened.

Thus, the afterlife would be spent with the gods until Ragnarok – the final battle and the end of the world.

This mythology certainly promoted adventurism by means of war, exploration, or trade. It lacked a clear definition of good and evil, but still included a set of virtues that all Odin-worshipping Norsemen pursued. It emphasised ambition, boldness, strength, ingenuity and, sometimes, slyness.

Another explanation for the sudden explosion of Viking activity across Europe is the need for gifts. The power of gifts was pivotal in Norse culture. Their society evolved around it.

The man who had the largest collection of precious items was always followed. This chief would give gifts to his subjects, and in exchange, his subjects would give him loyalty. If a chief ran out of gifts, he would lose the loyalty of his men.

The more exotic the items were, the greater value they had. Chiefs who were considered good were therefore often described as “generous” and “giving gold and gifts” freely.

Riches come either through trade, or through war. But the latter involved high costs and risks. For this reason, contrary to popular belief, the majority of Norsemen were active traders, not Vikings (raiders).

Their interest for the outside world greatly increased as the years passed by, and chiefs made sure to promote trade by investing in the development of trading cities, like Kaupang in Norway, Ribe and Hedeby in Denmark.

A vast and impressive trading network emerged, which is yet another explanation for the rising wealth in Scandinavia. Controlling the trade routes towards the North became very important to the early kings in the region.

To the Far North, the Norsemen taxed Samis and orbited closely around the North Pole to trade with Inuits for their immensely valuable furs, hides and walrus ivory. Heading East, they crossed into Arkhangelsk and Siberia.

On the long rivers of Dniepr and Volga, the Norsemen sailed to reach the Silk Road, Persia, Mesopotamia, Syria, the Holy Land and the Byzantine world.

Norse merchants were found in markets across Spain, Italy, France and even Africa. As we shall later discover, goods originating across the Atlantic also found their way into Scandinavian homes.  This amazing, global network made the Norsemen truly international.

The Norsemen owed much of their success to their technologically advanced ships. The development of this new type of ship building, was one of the major contributions that made the Viking era possible.

They exploited Europe’s many rivers, using them as highways, easily fleeing from enemies in a quicker pace than other ships. The ingenious longboats were ideal for both open oceans and narrow rivers. They were slim and fast, but also robust. They were also light, so that Vikings could carry them on-land if necessary.

With such a static system of profitable trade routes, competition over the control of these routes naturally became a defining element.

The Dniepr and Volga rivers were monitored by the Rus Norsemen, who taxed bypassing merchants and earned a fortune. The same tax was imposed on merchants travelling along the Norwegian coast, the North Way.

Therefore, competition among the tribes and clans along the North Way was fierce. They constantly attempted to enlarge their naval territories at the expense of their neighbours, and thus reap great wealth in trade taxes and tariffs.

A similar situation could be found in Sweden, a land divided between the Swedes and Geats (or Gots). According to the old texts, Denmark had technically stood united under King Dan, but then split again.

It was not reunited until 936, under Gorm the Old’s reign. Gorm’s son, Harald Gormsson “Bluetooth”, led Denmark to become a mighty Norse kingdom, exerting great influence over Viken in Norway and clashing heavily with the Anglo-Saxons in England.

However, Harald Bluetooth also converted from Norse paganism to Christianity – a remarkable moment.

Truly, Christendom and Norse paganism had stayed at war since 793, but the Christian religion slowly began permeating Scandinavian societies.

The brave missionary St. Ansgar – the Saint of the North – founded Christian communities in Denmark and Sweden. Priests and monks from Ireland spread the Scriptures along the North Way. At first, the Norsemen tolerated Christian activity, but it soon became complicated. As Christianity began spreading rapidly through the work of the missionaries, Norsemen felt threatened.