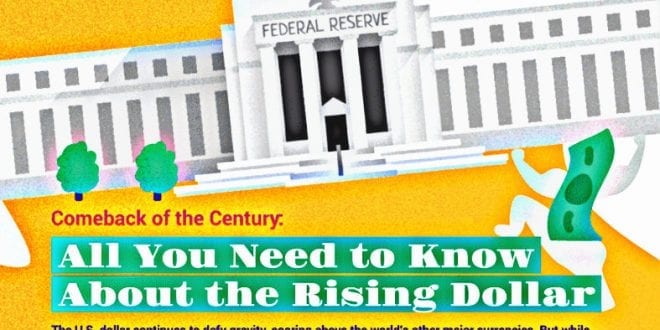 Herland Report: Morgaging America’s Future: The top levels of power in society control the economy, the political system and often the geopolitical development.

We therefore present some infographics that may explain the history and some of the reasons for the success of the Federal Reserve and the US Dollar. What will happen in the future, remains to be seen. (Illustration feature photo and below infographics, by Fortunly)

“The United States has been a military powerhouse for as long as we can remember. The country’s defense budget consistently outsizes those of those next-biggest spenders.

The US armed forces have a presence on almost every continent around the globe.

The country has over 400 bases, not including the installations located in its overseas territories such as Puerto Rico, Northern Mariana Islands, and Guam.

Most of America’s military facilities are hosted by Germany and Japan, two of its main World War II adversaries, with 87 and 86 installations, respectively, writes Milica Kostic for The Herland Report. She is a Content Development Specialist at Fortunly, Blogger at SmallBizGenius, Techjury and Hosting Tribunal.

According to Fortunly, the USD has been instrumental in enabling American-based importers of raw materials to flourish.

Weapons manufacturing contributes hundreds of billions of dollars to the US economy. This lucrative business, however, is nothing but a mirage.

ALSO READ: The Federal Reserve US oligarch owners: Out-sourcing the Monetary System since 1913.

Former US President Dwight Eisenhower’s fear became a reality during George W Bush’s presidency. Although the United States has not been at war for just 21 years since its birth as a country, the golden age of the modern military-industrial complex began when the Bush administration launched the “Global War on Terror” following 9/11.

Since 2001, defense has usually typically received the lion’s share of the massive US budget. Of course, the number-one buyer of American arms is the US government itself.

Furthermore, US friends have been swelling the coffers of American military contractors. Saudi Arabia alone bought US arms worth $13.7 billion between 2008 and 2018, accounting for nearly 60% of the oil-rich country’s weapon imports.

Moreover, the prolonged American invasion of Afghanistan has been giving the military-industrial complex a steady source of revenue for almost two decades.

Considering the financial and political clout the military-industrial complex now commands, Eisenhower is proven right about his fear of the unbridled US military expansionism.

Rumor has it that Eisenhower was supposed to use the term “military-industrial-congressional complex” to shed light on the situation in his 1961 Farewell Speech.

The US government has been guilty of deficit spending on practically bottomless defense resources. From 2000 to 2019, the outstanding debt of the United States has exploded over 400%. What once was just $5.6 trillion pre-9/11; now stands at over $22.6 trillion.

What is even more concerning is that most Americans are largely indifferent to the money their government has been spending on its military escapades abroad.

For nearly 20 years, the War on Terror was chiefly financed via the Overseas Contingency Operations funds. Such supplement appropriations are not subject to rigorous oversight. As a result, the executive branch never had to worry about a spending cap or think of serious public accountability for its military expenditures.

The use of credit instead of taxation to raise substantial funds for defense is perhaps the best explanation for the disinterest of most Americans in their government’s proactive and voluntary participation in Middle Eastern conflicts.

War financing has not been discussed enough in the US Congress in this century. This norm is the opposite of the tremendous regulatory scrutiny the matter received during the Vietnam War.

Americans today do not pay war taxes to fund the US government’s military operations overseas. The next generations will, however.

The United States’ ballooning national debt is expected to double in 30 years. With so much “free” money to be made, it’s hard to say whether the military-industrial complex has any intention in bringing genuine peace to the world any time soon.

Economic observers are not sure how long the American government can sustain its over-dependence on borrowing, and out-of-control defense spending. The only thing that’s certain is that US citizens of the future will eventually have to pay the price of the military’s policies one way or another.