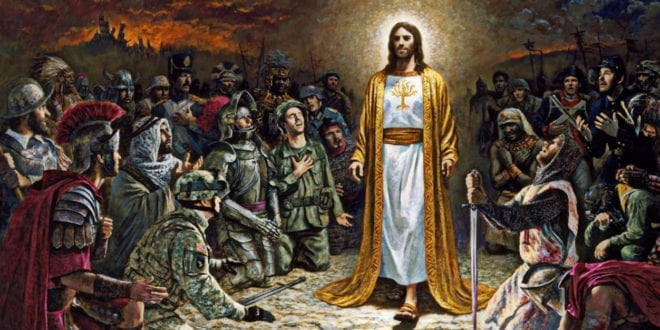 Herland Report: In a world where the Western media chronically demonizes religion and Christianity, let us take a look at the essence of the true Christian principles.

It is impossible to exaggerate the importance of Christianity’s influence on Western values.

Many do not even know which these are nowadays, assuming that most of our central values are “secular” of origin. Yet, in reality our most cherished Western values originate from the pool of Christian ideals.

So, how did revolutionary message of the philosopher and spiritual leader, Jesus Christ impact Western civilization?

World leading historians agree that Christian philosophy was revolutionary in that its definition of humanity was inclusive of all people, an altogether new view on the value of human life.

As we live in an age of atheist intolerance in an unprecedented and highly intolerable level, where the mainstream media constantly focus negatively on Christians, Muslims and religions in general, we should rekindle the knowledge how how groundbreaking the message of Jesus Christ was.

We join Kanye West and Coldplay in their recent focus precisely on that.

Contrary to what many think, brainwashed as we are by the liberal-progressive Western atheists, a number of our most important values come from the Judeo-Christianity heritage and its ethics, writes founder of The Herland Report, historian of comparative religions Hanne Herland.

Hanne Nabintu Herland is a bestselling historian of religions and bestselling author. She is the founder of The Herland Report Scandinavian news site, TV channel on YouTube and Podcasts which have millions of readers/viewers yearly. This is a great place to watch interviews with leading intellectuals, thought leaders, authors and activists from across the political spectrum.The Herland Report believes in freedom of speech and its editorial policy resides above the traditional Left vs Right paradigm which we believe has lost its relevance and ability to describe the current driving forces in Western politics. Herland’s latest book, The Culture War. How the West lost its Greatness, is available in the USA and 60 countries world-wide. www.theherlandreport.com

Comment to video from Lakewood Church: Kanye West’ new album, Jesus Is King, demonstrates yet again the ingenuity of this remarkable musician and true rebel in modern America. In a steady flow of surprising turns, Kanye West again shocks the world by using the very worst and demonized taboo word currently in the Western hedonist narrative: Jesus is King.

Ultimate Rebel Kanye West’ revolt against the Hedonist US entertainment industry is a Grand Slam. Kanye West could not have possibly found a worse revolt against the current hedonist, nihilist culture that permeates the very structures of Hollywood, the entertainment industry and the mainstream media. Let us instantly assume that the media will hate with a passion his groundbreaking record.

Vast Majority in the West are Believers

The statistics in favor of faith in God are remarkably high in the West. More than 80 percent of the American people believe in God, over 70 % in Europe believe that Jesus is the son of God. The number do not even include the high percentage of Muslims in Europe. Research shows that only 2-8 percent of the world population is atheist. This is according to Pew Research Forum, Encyclopedia Britannica, ISSP 2008.

Still, believers in God are told by the current Liberal atheist elites that they are old-fashioned, outdated and simply out of touch with reality. So, everyone except the 4 % atheists in the world, are out of touch with “the real world”? How do atheists know that there is no Creator? What do they know of “the real world” outside our universe? How can they prove that there is no God out there?

Atheism is itself a faith as no atheist has been outside the universe to examine whether there is a God out there. So, if you speak in faith about things you believe, why deny others to do the same? Today’s intolerance among many atheists and total lack of respect for the diversity of belief in the world has a strong streek of totalitarianism in it.

Robert R. Palmer, formerly a distinguished historian at Princeton and Yale, and Joel Colton, professor at Duke University, state in A History of the Modern World that Christian philosophy was revolutionary in that its definition of humanity was inclusive of all people, an altogether new view on the value of human life.

In Ennemis Publics, the French philosopher Bernard-Henri Levy and one of France’s well-known authors, atheist Michel Houellebecq, state that they are convinced that we would never have human rights without the originally Jewish and later Christian hypothesis: The incredibly bold idea about the creation of man, formed in the likeness of God, and therefore also sanctified.

Palmer states that it simply is impossible to exaggerate the importance of Christianity’s influence on the development of Western values.

Despite the fact that this viewpoint would later be seen as a secular idea and one of the cornerstones of secular society, there is no doubt about its religious origins.

Famous German philosopher and atheist Jürgen Habermas states in The Dialectics of Secularization: On Reason and Religion that Christian theology in the Middle Ages and Spanish scholasticism as the origins of what we today call human rights.

Habermas points out that modern moral philosophical and political theory pays a high price for excluding the very Christian ethics that in history has demonstrated the ability to motivate individuals to care for one another, to perform just actions.

A MUST READ: The defence of Christianity vs. Anti-Christian West. #KanyeWest.

Friederich Hayek and the West returning to Feudalism. WND.

In “Christianity and the Crisis of Cultures,” Pope Benedict XVI seems to concur, stating that after years of emphasis on scientific and technological progress alone, Western culture now suffers from a lack of emphasis on moral energy. This is the greatest threat to contemporary culture. Without solidarity, individuals become destructive. Democracy itself depends on citizen solidarity to avoid becoming the tyranny of the mob.

Early Christianity came into existence, marked by revolution, and developed among the lower classes of society, with a radically new view of the poor.

This is symbolically well illustrated by Christ being born in a manger.

The radical Jesus, went starkly against the political and religious elite associating himself freely with the feeble, the sick and – as the first feminist – broke the customs regarding how to engage with and validate women.

Regardless of the historical institutionalized church practice, the example of Christ is crystal clear on this matter. The very example of Jesus’ life illustrates how he steadily criticized the church leaders of his time, calling them hypocrites, dead graves, poisonous snakes and so on.

His all out humanist approach to human kind stood in stark contrast to many a religious leader’s focus on shallow, worldly religion. In the first four books in the New Testament, the ongoing fight between Jesus and the Jewish religious leaders at the time is one of the main themes.

In fact, the religious leaders were central in the killing of Jesus, hated as he was among them. So, the difference between true spiritualism as found in Jesus and the contemporary religious leaders could not have been sharper.

Christian ethics became the source of human rights and one of history’s most important contributors to the leveling of class differences. Socialism took several of its most famous values from the pool of Christian thought.

The idealized dignity of the worker, the willingness to fight for the rights of the common man and those with lower income not to be degraded by rich landowners, clearly reflect Christian attitudes.

Respect for all, regardless of rank, is a genuine Christian idea.

It is pointed out by Melanie Phillips in “The World Turned Upside Down” that Berger, Hegel and Max Weber saw Judaism as the main victory of rationality and secularization over paganism.

The sociologist Peter Berger asserts that it was in Judaism that radical new ideas of how humans best should act as morally responsible appeared, ideals that later influenced both Christianity and the secular Western world on a massive scale.

So, let’s celebrate Christianity as Central in Creating Western Civilization and hail the little boy born in the manger who revolutionized the way we perceive the value of human life.

THOUSANDS SUBSCRIBE TO OUR WEEKLY NEWSLETTER AND TV SHOWS. Follow the trend and be one of them, and SHARE the articles: Thanks so much for reading! More people, like you, are supporting and reading our investigative work, than ever before. All articles are free, no pay walls. The best way to make sure you see what we publish is to subscribe to the mailing list, which will get you a weekly email notification and alerts about our TV shows – FOR FREE! Our articles and TV shows are entirely fan-supported, so please consider sharing it around!
Share
Previous Jul er verdens største feiring av Guds kjærlighet til mennesket – Nabintu, Aftenposten
Next Christmas is the world’s largest celebration of God’s Love for Human Kind