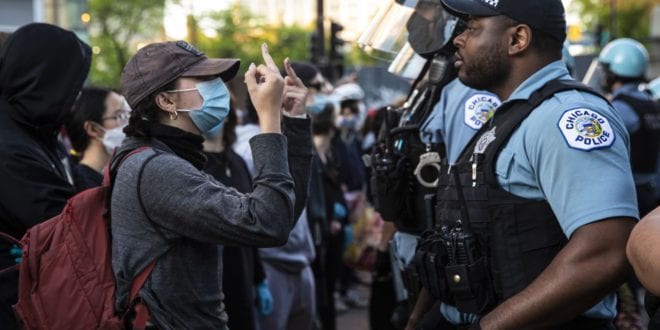 Herland Report: Black Lives Matter riots marginalize blacks as “looters, thieves,” creates more segregation, says Hanne Nabintu Herland: The murder of George Floyd, which raised legitimate anger over police violence, has sadly been heavily abused by infiltrating political and anarchist groups that intermingle with those rightfully protesting against racism, and cause looting and civil unrest that they know will be blamed on blacks.

Donald Trump will benefit from this in November, as sane Americans will want law and order and jobs, not defund police and an anarchy of millenials.

Why do so few Americans reflect on the driving forces behind the wish to segregate blacks from white even more than before, which is the likely consequence of the racially determined civil unrest that creates more fear than ever between white and black?

Who pays these youngsters, asks historian, author and founder of The Herland Report, Hanne Nabintu Herland.

Law enforcement sources, Andy Ngo, and Fox News have identified two organizations as playing an active role in the attempt to implement anarchy in New York: The Revolutionary Abolitionist Movement and The Base.

And most peculiar of it all: Some of these groups seem to be funded by the very same white, rich billionaire structures that seek to gain even more power in the United States. #CreativeDestruction.

While the Black Lives Matter funding is said to go to those in need, donations go directly to a fundraiser called “Act Blue” that has given hundreds of millions to white, rich Democrats running for President. Act Blue is actually a fundraiser for the Democratic Party.

Donald Trump is the likely winner, as no peace seeking American will vote for the Democrat supported anarchy that wishes to abolish police and thereby create civil war and mass suffering among civilians?

Black Lives Matter riots marginalize blacks as “looters, thieves,” creates more segregation: Is the bottom line aim actually to marginalize the black community even more, as white America now watch how “blacks destroy their own communities and loot and steal all over America”?

The impression created of blacks looting and breaking the law, (US gun sale has doubled in few weeks), is that “looting and stealing is what black Americans do”. Who benefits from this scenario?

They are so easily duped by feelings created by media propaganda and group think that they do not reflect upon how the race question now is being exploited to create even more hatred.

One of our Herland Report TV interviewees, the bestselling American author and former CIA asset, Paul Williams say that “there is no possible way you can ever, ever, ever underestimate the stupidity of the people.” Whatever you tell them, they will believe, especially if it comes from the media.

CNN editors have on tape, undercover, revealed the same attitude, that “Americans are stupid as s***”.

Why do so few Americans reflect on the driving forces behind the wish to segregate blacks from white even more than before, which is the likely consequence of the racially determined civil unrest that creates more fear than ever between white and black?

Just as the MeToo movement ended up causing Wall Street to refrain from hiring women, I fear the current Black Lives Matter movement will make it harder for blacks to get jobs. The fear of being deemed a “racist” and publicly flogged is now so strong that many will, almost at any cost, avoid getting close to people of color. The risk simply is too high.

Black Lives Matter riots marginalize blacks as “looters, thieves,” creates more segregation: The tactics of infiltrating legitimate movements follows the Gene Sharp manual From Dictatorship to Democracy: Use a grievance that the local population has against its political leaders, identify and support those who oppose the current government, infiltrate and strengthen opposition movements, fund them with millions of dollars, organize protests that seem legitimate and have your paid political instigators dress up in regular clothes to blend in.

If blacks today had a real leader like Martin Luther King, Jr., that leader would be protesting police violence against people irrespective of race.  Such a protest would be a unifying act instead of a divisive one.  People such as myself could again see hope for American society, writes Paul Craig Roberts.

It happened in Maidan, Ukraine where mercenaries later said they were instructed by Americans to begin shooting. This instigated the overthrow of the government there.

Civil unrest now unravels in the US, step by step according to the exact same Gene Sharp manual, even with bricks and stones administered to the raging demonstrators, just like what happened at Tahrir square in Egypt in 2010.

Twitter erupted with locals photographing the piles of bricks all across Texas, being laid out along the path where demonstrations were to be held, and Instagram films showing white young, black clad girls smashing windows, writing Black Lives Matter on walls being stopped by black women who asked them why they did this. We are going to be blamed for this looting,” said the young blacks, as the white rioters smashed windows.

“If blacks today had a real leader like Martin Luther King, Jr., that leader would be protesting police violence against people irrespective of race.  Such a protest would be a unifying act instead of a divisive one.  People such as myself could again see hope for American society,” writes Dr. Paul C. Roberts.https://www.hannenabintuherland.com/usa/collective-us-stupidity-threaten-to-demolish-national-unity/

“Instead of reforming police training as a rational response to George Floyd’s death from an aggressive restraint technique, the Minneapolis city council voted to disband the Minneapolis police.”

Black Lives Matter riots marginalize blacks as “looters, thieves,” creates more segregation: What the Black Lives Matter movement does not sufficiently understand is that they are being used by billionaire white capitalists who aim to get to Trump.

Before corona, the US under Trump saw the lowest unemployment rates among blacks in over 50 years, prison reforms that benefit blacks were carried out by the Trump administration, black Americans are front and center in his administration.

When the record low black unemployment rate was announced during the Trump annual State of the Nation address, Democrat Speaker of the House, Nancy Pelosi even refused to clap. It apparently was nothing to her, she even tore up the Trump speech on national television. As we all remember, it was the Democrats that fought for slavery, supported the confederate flag, joined the KKK and so on. The hypocrisy illustrates the real agenda.

The rightful grievance over racism and the murder of George Floyd is used to try to get Trump since Russia Gate, Impeachment, the corona scandal and nothing else has worked. The aim is to end democracy in the United States, control Congress and politics and assemble the power into the hands of the very few. And all of those are white and rich.