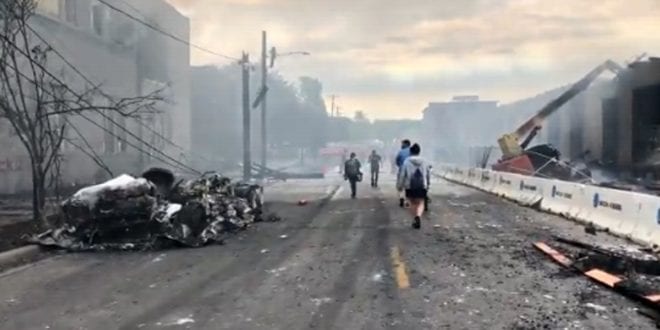 Herland Report: Any sane American with some sense of rationality would reform the police, not abolish it. Those who will mostly suffer from no police around are precisely the black communities. Naturally, blacks are overwhelmingly against defunding the police.

I have long said that the Black Lives Matter anarchy riots are politically hijacked by anti-Black forces and will produce an even harder life for blacks.

I have long said that the Black Lives Matter anarchy riots are politically hijacked by anti-Black forces and will produce an even harder life for blacks.

In Europe, which has received millions of refugees, many now shouting that Europeans are racists after living on benefits in Europe for years, will see a similar development. It will be harder to be black in Europe too as the attitude backfires.

A recent poll showed that 40 % of businesses destroyed had black owners. Blacks are now more likely to be judged as “looters and thieves” post what has happened than before.

So, in whose interest is it to portray black Americans as “looters, thieves and people who destroy property”?

Many videos have surfaced showing black Americans filming white anarchists looting and spraying BLM on walls, destroying property. In the rallies, white millenials seem to “have fun” looting, yet how exactly are they depicting this to help black lives? Maybe the aim is not at all to help the poor African American community, but rather to demonize them all even more. I wonder.

A recent poll has revealed that black Americans overwhelmingly oppose the idea of defunding the police.

And why wouldn’t they?  Black Americans would suffer the most if police departments had to cut back or were even dismantled if God forbid the Marxists got their wish.

Any sane American with some sense of rationality would reform the police, not abolish it. Those who will mostly suffer from no police around are precisely the black communities. Naturally, blacks are overwhelmingly against defunding the police.

A HuffPost/YouGov poll found that a majority of Americans do want police reform, such as banning chokeholds, however, the least popular thing in the poll turns out to be defunding the police.

“Self-described liberals support defunding the police by a 13-point margin,” HuffPost reported. “But nearly every other ideological and demographic group opposes it.

It also revealed that while about one-quarter of black Americans support defunding the police, 49 % actually oppose the idea.

Black Americans are overwhelmingly against defunding the police:  The divide over defunding police could also be due to partisanship.  Many black Americans have been taught by Democrats and leftists that the police hate them, and when they come into any contact with police it’s because the cops want to harass them.

Many black Americans have been taught by Democrats and leftists that the police hate them, and when they come into any contact with police it’s because the cops want to harass them.

The fact that many black neighborhoods suffer from a very small number of criminals who commit disproportionately large amounts of crime, is why police use tactics to weed out criminals before something happens in the community.

By cops doing things like stop and frisk, black neighborhoods have seen crime reductions, but many black people who are caught up in such crime prevention tactics consider it harassment.

“By contrast, solid majorities of the public favor banning police chokeholds (73% support this), creating a federal registry for complaints against officers (72%), developing a national standard for police use of force (69%), making it easier for the federal government to charge officers for using excessive force (68%), assigning independent prosecutors to handle cases where officers use fatal force (67%) and eliminating officers’ ‘qualified immunity’ against misconduct lawsuits (59%),” the pollsters noted.

The poll discovered that white Americans and Republicans are most opposed to defunding police, as well as older Americans.

Here’s something to chew on.  After the Freddie Gray riots in Baltimore, the Mayor and District Attorney, who ordered the cops to do high-level drug arrests that fateful night, threw the cops under the bus when Gray died on the way to the jail in the back of a police van.

Because of that, many cops no longer take the extra step of doing things like stop and frisk, pulling over a suspicious car at 2 o’clock in the morning that was driving slowly down a neighborhood street that has had a lot of houses broken into.

They didn’t want to take the risk of having their city leadership blaming them if something happened during a bust.  By police trying to protect themselves against political attacks by their superiors, this caused crime statistics to skyrocket in the city.

You can’t on one hand say that all police are so racist that we need to just get rid of them altogether, while at the same time try to be responsible in how to protect city residents.  Black people are not stupid.  They get it.  I wish some of them would explain to the leftists pushing for dismantling and defunding police because they are stupid.
THOUSANDS SUBSCRIBE TO OUR WEEKLY NEWSLETTER AND TV SHOWS. Follow the trend and be one of them, and SHARE the articles: Thanks so much for reading! More people, like you, are supporting and reading our investigative work, than ever before. All articles are free, no pay walls. The best way to make sure you see what we publish is to subscribe to the mailing list, which will get you a weekly email notification and alerts about our TV shows – FOR FREE! Our articles and TV shows are entirely fan-supported, so please consider sharing it around!