We sat down with Dr. Ron Paul, founder of The Liberty Report to discuss the driving forces behind the massive US debt structure in the United States.

Will the US survive the “cure debt with new debt” strategy?

“The American system is failing. The people who are on the defensive now are the people who believe in the superpower state. Even the neo-conservatives are on the defensive because everything they do fails. Look at the Middle East. All our policies are failing. We help our enemies as much as we are supposed to help our allies,” Dr. Paul says in an interview with The Herland Report TV.

Dr. Ron Paul is a former US presidential candidate, Senator, Congressman, leader for the Libertarian movement in the US, author of many books and founder of The Liberty Report, known for his critical views of the Federal Reserve, the military-industrial complex, NSA surveillance and US participation in the wars abroad.

“That’s why you have the cultural Marxists in our universities, preaching. They want to disrupt our culture so that they could mold it back together in a different type of centralized control. It is cultural more than economic Marxism, but certainly the introduction of the neo-conservatives has been a big deal too.” 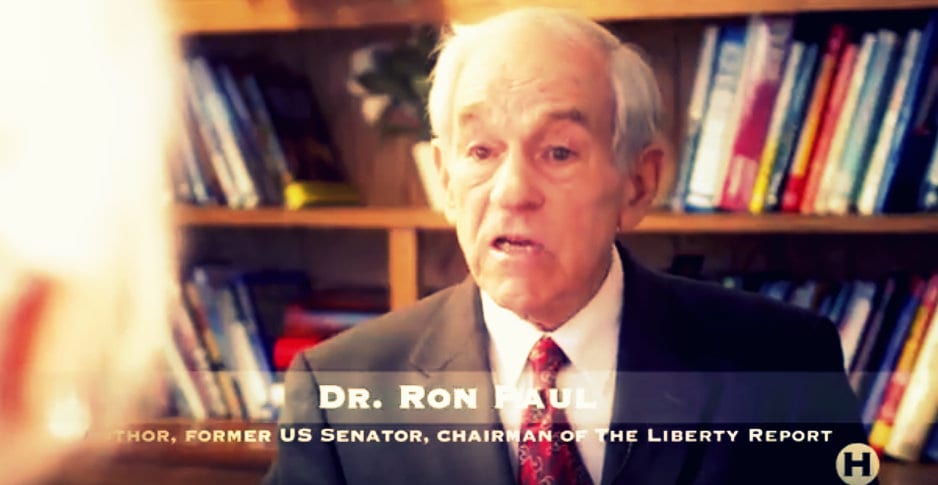 Hanne Nabintu Herland, historian of comparative religions, author and founder of The Herland Report: – US four-star general Wesley Clark famously stated that much of the disarray we see today started happening around 1993, or even before, when the neo-con movement gained power with Paul Wolfowitz, a rising Dick Cheney and that particular group. What’s your analysis on this?

Dr. Ron Paul: -There’s been a quite a few dates that people use to describe what’s happening today, whether it is the 1980s or 90s or other. Many of us in the libertarian movement see that our problem started before that. We talk about the progressive era, the early part of the century, the Woodrow Wilson era. He wanted to make the world a safe democracy and if you didn’t want to do that you were not a good American. We got involved in a war we shouldn’t have gotten involved in.

In 1913, we introduced the notion that all income belongs to the government and they would allow us to keep a certain percentage. This was the income tax.  This guaranteed that the American system emphasizing individual liberty would be undermined and it has been systematically undermined since. 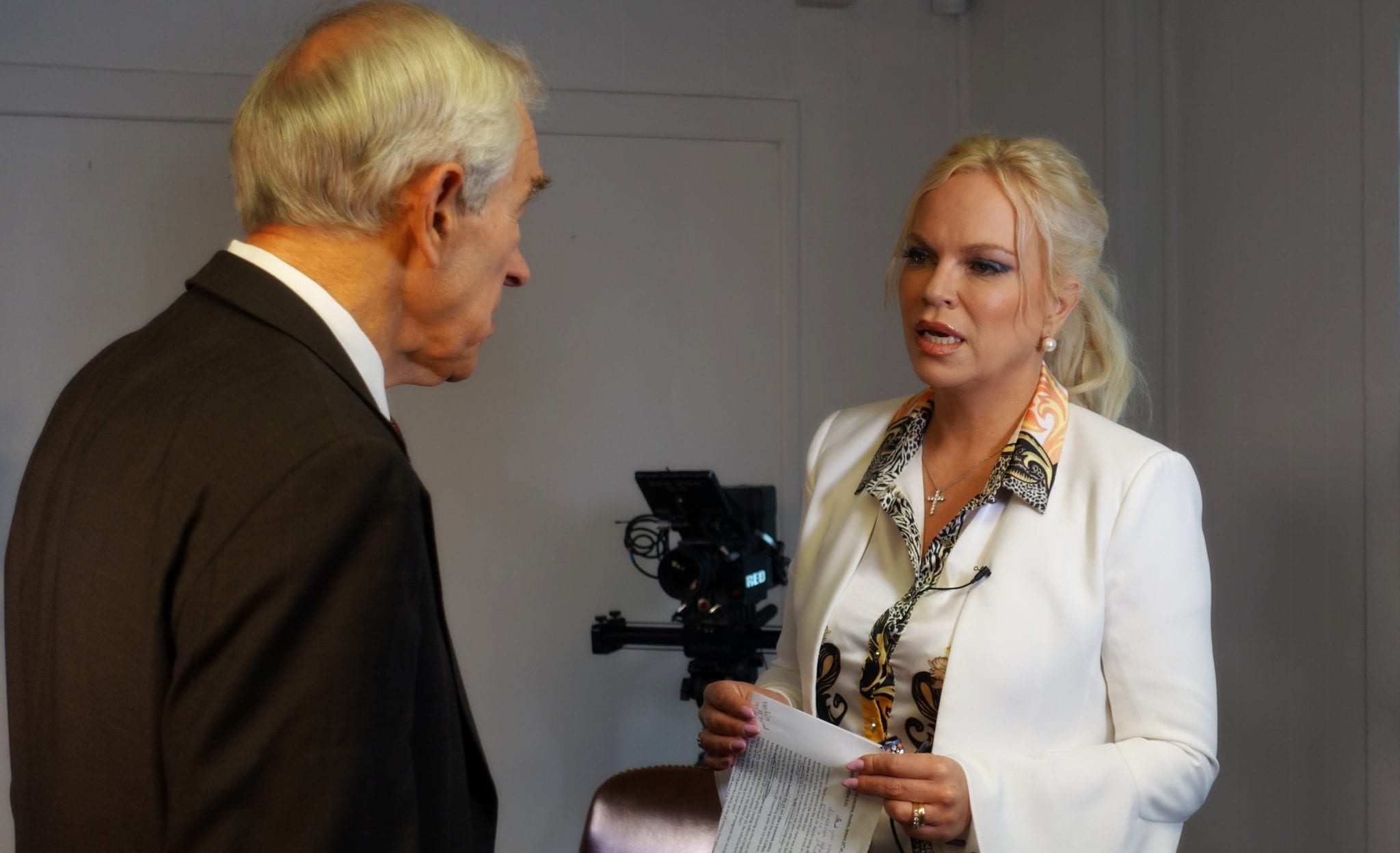 Dr. Ron Paul: – Culturally, there are still a large number of Americans that might represent a view that I endorsed, but we have been sort of silenced. We are not on TV, we are excluded from universities and even now we have Google and Facebook sort of monitoring us so that we can’t put our messages out as easily as others.

There is a big contest going on. This system where culture has deteriorated controls the economy. In spite of the positive elements, the economy is built on debt and bad investments. Money is being spent in the wrong way, and this is coming to an end. That is why we are optimistic from our libertarian point of view, because the current system does not work.

That is why you have the cultural Marxists in our universities, preaching. They want to disrupt our culture so that they can mold it back together in a different type of centralized control. It is cultural more than economic Marxism, but certainly the introduction of the neo-conservatives has been a big deal too. 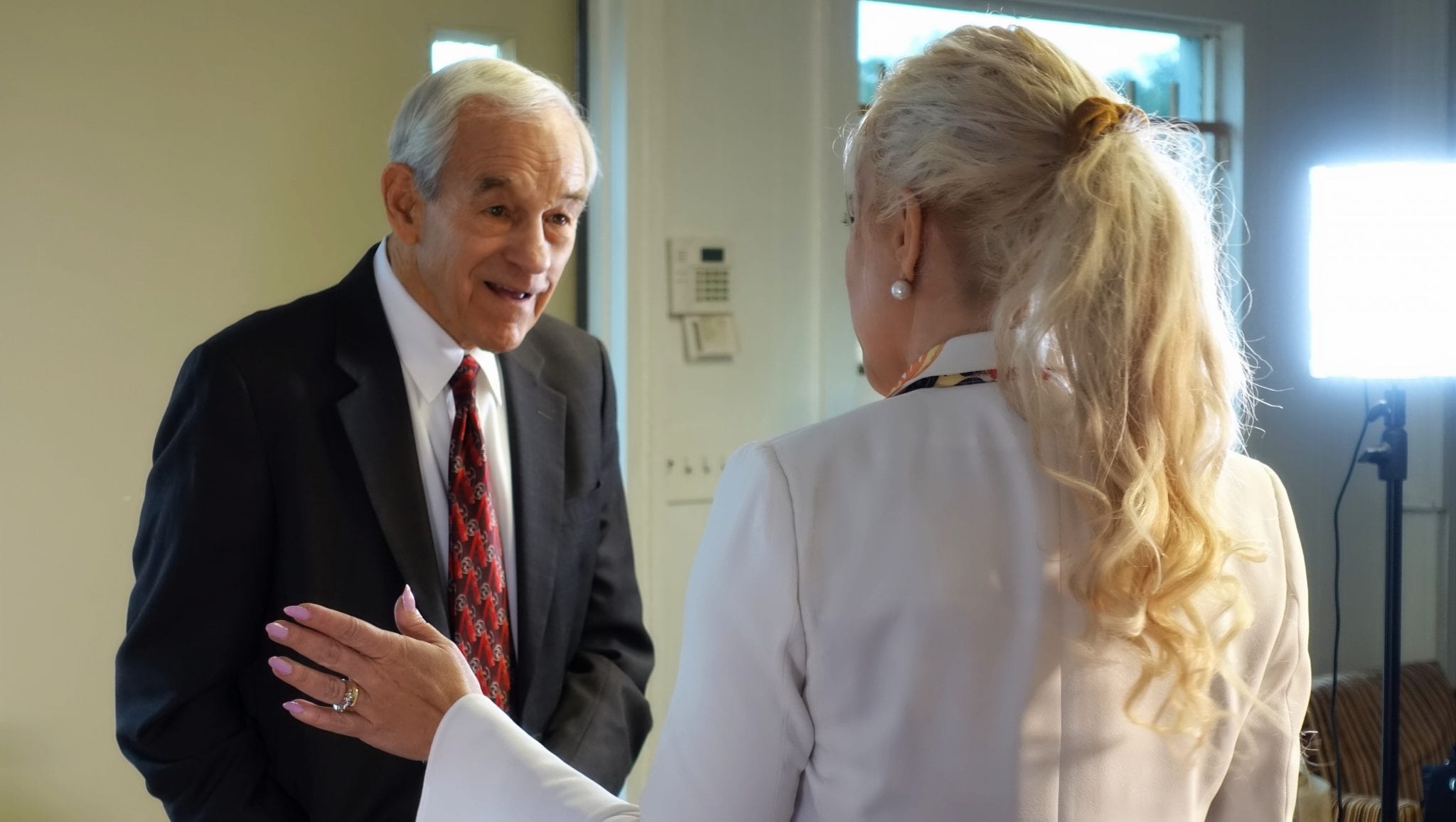 I got involved with politics and took the position saying our traditions were meant to be non-interventionalists. We were supposed to stay out of this.

There were a lot of people who listened and paid attention, but of course there were also a lot of people in strong opposition to what I was saying. We are still trying to reach out, so we are delighted to be on a program like yours, because we find out that even though our numbers are small, we have found out that there are people around the world that follow our work and we love to hear from them.

Hanne Nabintu Herland: – We all used to feel sorry for the people that lived in the Soviet Union, living under such biased propaganda. Now the exact same thing seems to be happening to the West, a totalitarian system really. It’s an oppression of free speech, yet the West used to be such a beacon for free speech.

Dr. Ron Paul: – I was thinking about this the other day because there is a lot of addiction in this country, opioid and alcohol, and this used to be a characteristic of the Soviets. They would show pictures of how the Soviets felt destitute and drank more and so on. We have gone in the same direction.

The more authoritarian a society is, the less creativity there is. There is less intercourse between people, talking and sharing ideas and developments. Of course, the Soviet system didn’t develop much, this is also happening to us right now.

The only thing that we export now are dollars and we get a good deal because we have managed, through our military and economic power, to maintain a dollar system. Therefore, we have a tremendous advantage over that, but it is a system that is deteriorating. It must be reversed. 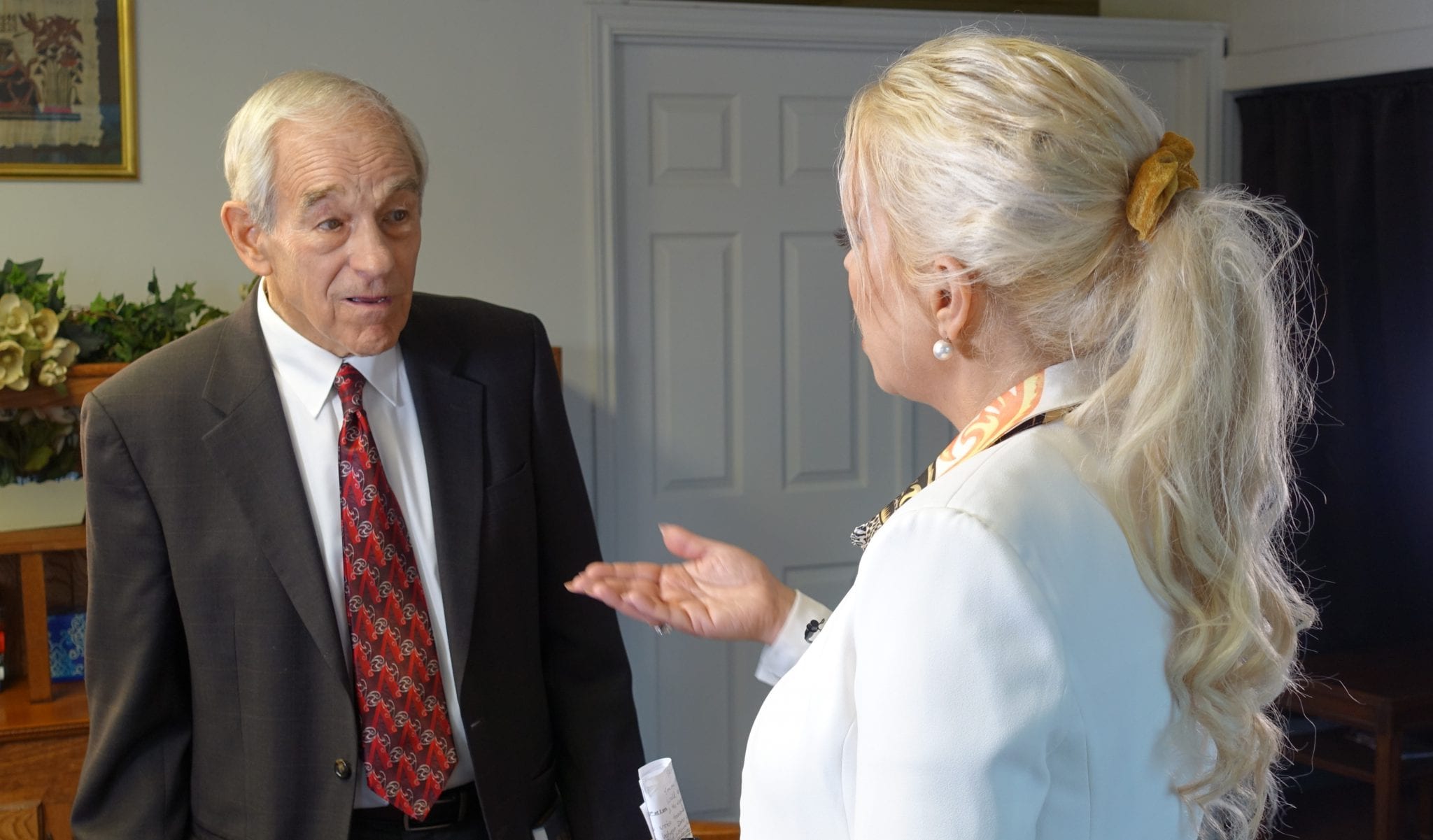 My message is that there still are decent people in this country who know what is right and want to go in that direction. I am also optimistic because if you have, maybe 8-10% of the people who know the right thing and do the right thing, and that are in a place of influence, you can reach out and impact.

Ideas are very powerful. That’s why I resent the people who spread American exceptionalism with guns and sanctions. We should be spreading a good message and providing the information with other ideas. When you have that, the army can’t stop us.

They cannot be stopped because ideas can be spread despite of armies and authoritarianism. It is a rough walk a lot of times because governments don’t want to give up an inch of their power. This is the struggle going on right now.

Our system is failing in a very narrow sense and of course some would say that I am unpatriotic about it, but it is good that bad ideas are failing. I want the fiat currency to fail. I want people to have honest money. I want liberty to prevail.

We do not need better economic planning. We need people to plan their own lives in a personal way for people to spend their own money. We need to accept the idea that all foreign governments can deal with their own problems, we should not get too much involved.

That doesn’t mean we endorse their government, but it means that we do not have the moral authority to bring in our armies and start controlling their elections, which we too often do.

The United States controls their elections and interfere, as if we are going to “spread our goodness”. That is a good way to create fear and more chaos.

Hanne Nabintu Herland: – It has been interesting for us speaking to many Americans while visiting the US. So far, all the people I have spoken to would agree with you. Over 90 % of the American media is owned by only 6 corporations. Half of those corporations are owned the weapon industry here. So, who cares about the people, the people’s perspective?

Dr. Ron Paul: – There is little empathy from those who are in charge, I have dealt with them. I have been in Congress a long time and when I bring up this subject of removing people’s liberty by doing what they do, they respond to me that “the people don’t know how to take care of themselves”. They believe that.  They are ordained to take care of people. 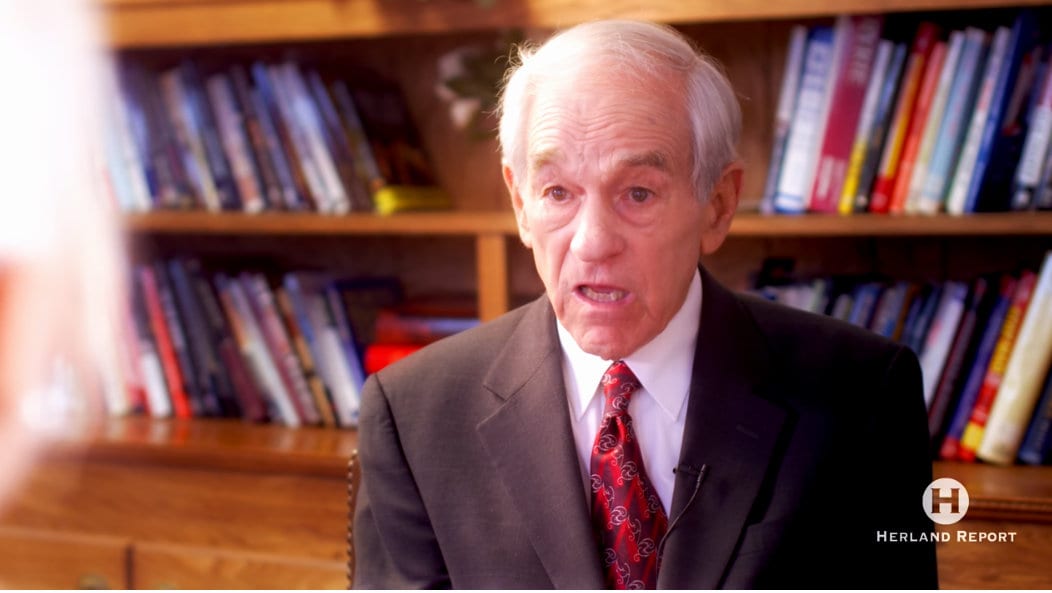 I can recall asking two different chairmen of the Federal Reserve board of what they are doing with these low interest rates. They are punishing the people who wants to save money and take care of themselves. They say that they acknowledge this, but that this the price that they need to pay.

Just like the Madeleine Albright famous quote about the Middle East, when she was asked about the 500 000 Iraqi children who died by our bombs. She said that this was a price we had to pay for us doing “our good deeds”. So, they do not have empathy for the people.

I think the only system of government that can show real empathy is a government and a people who can recognize what personal liberty is all about: To allow people to have their liberties, make their own mistakes, face the responsibility and to reap the awards of the work they do. That system has been proven to be the best system ever. Yet, it is under systematically attack right now.

THOUSANDS SUBSCRIBE TO OUR WEEKLY NEWSLETTER AND TV SHOWS. Follow the trend and be one of them and SHARE the articles: Thanks for reading! The best way to get around the internet censors and make sure you see what we publish is to subscribe to the mailing list, which will get you a weekly email notification and alerts about our TV shows. Our articles and TV shows are entirely reader-supported, so if you enjoyed this piece please consider sharing it around.
Share
Previous Norges kronprinsesse Mette-Marit møtte jevnlig Jeffrey Epstein
Next Artikkelserie: Samfunnsforskning er politisk kulturradikal i livssyn, ikke nøytral