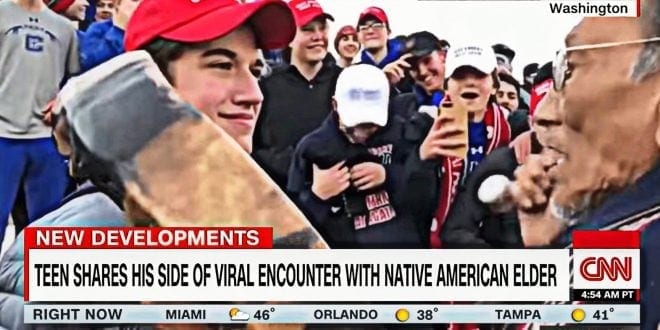 Herland Report: The Covington Catholic High incident in Washington DC, January 19th, may be one of the worst demonstrations of racism against whites in America in a long time.

We welcome the upcoming letters from Covington Nick Sandmann’s lawyers, preparing for defamation lawsuits against celebrities, news outlets, individual journalists who were remarkably quick to slander Sandmann and his classmates for “harassing a native American”, without even taking the time to check the facts.

The American mainstream media outlets were remarkably quick to pour out sinister stories about the white, heterosexual male Covington High students – Christian Catholic too and wearing MAGA hats – before even taking the time to find out what really happened.

Having ticked off all the boxes for groups in society that currently have no protection whatsoever, – white, male, Christian, Trump supporter – Twitter rants read all kinds of threats and violent suggestions that wished them dead, bombed, their school destroyed etc.

Nobody touched the group of four Black Hebrew Israelites’ who, as may be heard in the video below, abused both the white boys, the native Americans and others who happened to pass by.

The native Americans were addressed in a remarkably rude and racist way, yet no American mainstream media outlet has touched the subject.

Why the attack on the white Catholics who offended nobody, and no mention of the ugly language from the Black Hebrew Israelites? Where is the equality regardless of race or is this a forgotten principle in racist America?

By the way, the native American Indian who wore the drum, is reportedly known to be a notorious liar. The man was never a Vietnam veteran, although this has been his claim in previous media reports. Is he protected from criticism due to his identity as a native? Again, where is the equality regardless of race?

Watching the video prepared by Nick Sandmann’s lawyers, definitely sheds light as to the other side of the story, with corresponding video footage.

We suspect the American mainstream media outlets would never dare to make the same type of national lynching mode against the Black Hebrew Israelites as they did with the young white boys. Note that racism is judging someone based on his skin color alone.

The student’s lawyers are preparing letters for possible libel and defamation lawsuits, the Cincinnati Enquirer reported. The list of recipients of the warning letters includes actress Alyssa Milano and Senator Elizabeth Warren.

Targeted journalists include Maggie Haberman, David Brooks, and media outlets will include TMZ, CNN, and the New York Times. The attorneys have also identified the dioceses of Covington, Lexington, Louisville, and Baltimore as potential recipients of the letter, according to Breitbart.

We certainly welcome the move.

Longer video clips also proved that no one yelled “build the wall.” Nearly every single initial report on the incident was flawed and presented the kids as the aggressors when in truth they were not. “For the mob to just go tear apart a 16-year-old boy is inexcusable,” McMurtry told the media. “He’ll never be able to get away from this.

Sargon of Akkad has taken the time to assemble some of the horrifying Tweets, that wished the boys all kinds of evil. We assume this sums up the level of madness that the West currently finds itself in, with media structures that do not face requirements of truth telling and objective reporting anymore.